5 Jobs that will Disappear By 2030 Due to Automation 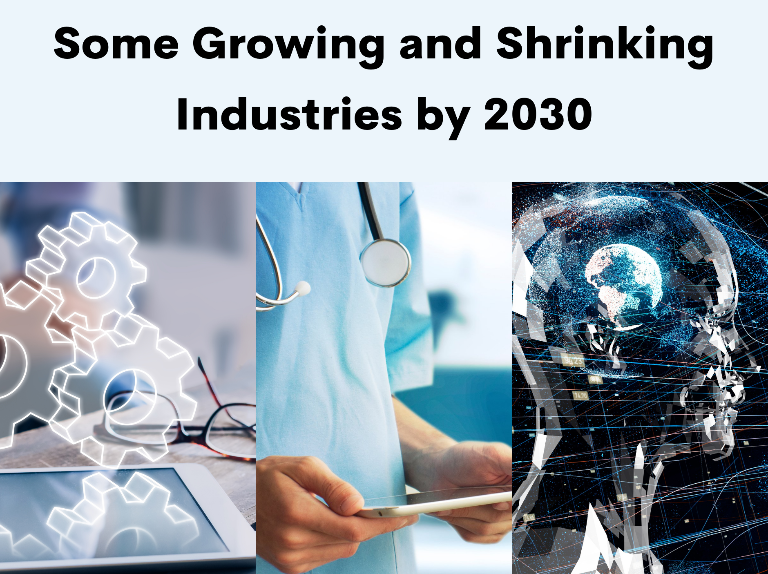 In simpler words, the stories we heard in the last decade regarding the impact of automation will turn into reality in the next ten years.

Yes, the increased demand for robots and technologies like artificial intelligence will replace some jobs and introduce newer ones.

As per one Mckinsey report of 2017, automation will replace around 800 million jobs worldwide, and nearly 500 million employees will be unemployed.

Undoubtedly, countless jobs will disappear, but automation will also bring some new job opportunities. Many of these new work opportunities will be in the budding industries.

Which industry will lose more jobs due to automation? What type of jobs will automation introduce to the corporate world? Let’s find the answer.

Industries that will be disrupted most by 2030 due to automation

The entry-level jobs in the travel industry have already disappeared before automation penetrates deep into the corporate world. Those days are gone when people visit the travel companies and book their flight tickets and holiday packages.

As tons of knowledge is available on the internet, travelers can book their flight tickets and holiday packages with minimal effort.

Travel agents will soon get unemployed in the travel industry due to automation. As chatbots are becoming more advanced and travelers are no longer interested in meeting travel agents, the impact of automation on this industry will be long-lasting.

Despite having a vehicle, many people opt for booking cabs to travel from one point to another. And the reason is obvious; people are ready to spend money instead of touching that gearbox multiple times and straining the back on the driver seat.

Coming to automation, sooner automated cars will be running on the roads. Recently, Uber has invested millions of dollars in their upcoming driverless car projects. When this news came out, jokes were flourished on the internet that cab drivers are working day and night to get unemployed in the upcoming decades.

The leading cab firms won’t be interested in paying to the cab drivers when the vehicles can run on their own.

The demand might leave some market for the human cab drivers, but they will struggle to earn their daily bread and butter. It’s for sure that humans will prefer automated taxis instead of human-driven taxis.

Cardless transactions have become the ideal choice for everyone; those days are not very far when cashiers won’t manage the transactions. Nowadays, there is also no need to carry credit/debit cards for making transactions unless you’re making hefty transactions.

Recently Amazon launched Amazon Go, known as the world’s most advanced shopping technology where consumers can pick their desired items and move from the store. There is no need to stand in the queue, give cash or card, get the billing information, etc.

In short, the cashier roles won’t exist much in the next ten years.

You might be shocked after seeing ‘fast food restaurants’ on this list. Fast food restaurants always give us multiple reasons to believe that they don’t rely much on human workers. If you visit fast-food restaurants in western countries, the concept of ‘self-service’ is adopted. You place the order, and you can look at your order getting ready in the kitchen.

Many fast-food restaurant chains are already planning to reduce the human workforce and let the robot technology put cheese on the burger and deep fry the potato fries. Sooner, you won’t find several chefs and waiters working in the kitchen and dining area. You’ll see robots making your delicious food and serving it on your dining table too.

Industries expecting more jobs in the near future due to automation

Obviously, when automation penetrates deep into the corporate role, all the AI-related jobs will be in-demand. Forget about after ten years, there are numerous AI job roles available, and the candidates are limited. The jobs are like data engineer, data scientist, principal scientist, computer vision engineer, etc will indeed stay in hot demand by 2030.

Yes, the IT industry is the creator of technologies, and this sector will be benefited because of automation. As people rely more on technology, the job growth in the IT sector will shoot up. However, the job roles in IT would be more specialized towards technology and automation. Above all, the establishment of cyber cities will also be increasing worldwide, especially in western countries. As a result, you can also expect some newer job roles in the IT industry due to automation.

Automation and AI are already present in the healthcare sector, but they haven’t decreased job growth. Automation will indeed make the daily complicated procedures automated, but humans will regulate everything.

As a result, if anyone is threatened to get unemployed due to automation, the solution is choosing the industry wisely and constantly acquiring skills. The more skills you have under your belt, the more valuable you look into the eyes of your future employers, even during the automation era.

Mr. Sathish Ranganathan
Director,Promind IT Consultants Pvt Ltd
HR-Inc Recruitment Team! Thanks for your assistance. I've been impressed with your professional recruiting services so I have not been communicating with other recruitment / placement agencies.

Mr. Manigandan Boopathy
HR Manger, Vijay Raja Homes Private Limited.
HR Inc is good indeed and i would like to continue the same and thanks for your co-operation.

Ms. Archana
Director, Suisse Tech Partners
HR Inc Team is absolutely trust worthy and reliable, The Executives are hardworking and pro-active who always targets to reach goals quickly. Thanks for helping me in building my team swiftly.